The American Civil War Round Table of Queensland (ACWRTQ) began in 1998. There was just one such club then, the American Civil War Round Table of Australia (ACWRTA), founded in May 1972 and based in Melbourne, Victoria but with an Australia-wide membership. In June 1998, four ACWRTA members living in Brisbane held a meeting in the History Department of the University of Queensland, St. Lucia. They formed the ACWRTA (Queensland Chapter). In August, the club started a newsletter Rebel and Yankee News.

A Civil War seminar at the University of Queensland, a BBQ picnic at Mt Coot-tha, a black powder rifle shoot at the Ripley Range, Ipswich and stalls at local Gun Shows attracted new members during 1998-2000. In 1999, the club met in a small basement room of the Coorparoo Returned Service League (RSL) Club. The Coorparoo RSL remained the ACWRTQ meeting venue until The Pandemic forced a relocation to the Gold Coast Rifle Clubhouse at the Belmont Shooting Range. In October 2000, there were enough members for the club to become a separate, incorporated body under state law. It was renamed the American Civil War Round Table of Queensland Inc and after 9 issues, Rebel and Yankee News was renamed the American Civil War Round Table of Qld Newsletter. Rhonda O’Dwyer was elected the first president of the ACWRTQ. 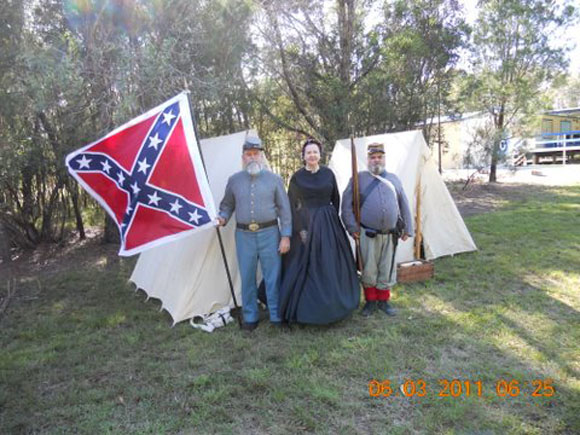 In 2001, the ACWRTQ was invited to put on a Civil War display at the Brisbane Medieval Fayre then held annually at Musgrave Park, South Brisbane. This elicited more invitations. The ACWRTQ has held displays at History Alive at Fort Lytton from 2002 to 2019, (NOTE: from 2019, History Alive will move to the Ipswich Rd. Rocklea Showgrounds) the Ipswich Heritage Festival, the Esk (later Brisbane Valley) Multicultural Festival, the Gold Coast Militaria & Medieval Festival, the Redcliffe Military Fair, the Glen Innes Celtic Festival (New South Wales [NSW]), Toowoomba’s Heritage Rally and Napoleon’s Military Bookshop, Brisbane City. In 2004, the impressive 600-figure diorama of the famous Picket’s Charge (1863 Battle of Gettysburg) entitled "In God’s Hands" was donated to the club by Rockhampton modellers Gary and Alan Woodfield. Their diorama became the centrepiece of the club’s Civil War display at the Beenleigh Historical Village in 2008. Beenleigh developed because cotton plantations with riverboats and Kanaka labour were established there in 1861 to profit from the English cotton shortage caused by the Union blockade. In 2019, this display maybe relocatted to the Coorparoo RSL. The ACWRTQ has been invited to mount displays for two Civil War-themed movie premiers in Brisbane – Gods and Generals at the Balmoral Cinema (23 October 2003) and The Conspirator at the Palace Cinemas (25 July 2011). It also gets invitations to the Brisbane premiere of Civil War themed films such as  Lincoln (2012), 12 Years A Slave (2013) and The Free State of Jones (2016).

A highlight comes from a group of living historians within the ACWRTQ. This had humble beginnings when member and US expatriate Ed Best formed the “Private John C. Babb Memorial Colour Guard” in early 2002. Ed is a descendant of Babb, who had joined Company ‘A’, 44th Georgia Volunteer Infantry Regiment on 10 March 1862. Babb fought with the Army of Northern Virginia at Mechanicsville, Gin’s Mill and Malvern Hill. Babb died of fever and was buried at Hollywood Cemetery, Richmond on 20 September 1862. Starting with four re-enactors, the living history group grew to ten (with 4 ladies) and the Colour Guard expanded into Company ‘A’, 44th Georgia Volunteer Infantry Regiment by June 2002.  Another US ‘expat’ Trace Scalf, who had living history experience, taught proper drill to the ACWRTQ. On 21-23 January 2005, the living historians participated in the largest Civil War re-enactment in Australia. The "Battle of Williamsburg 1862" event occurred in the Old Sydney Town theme park at Gosford, NSW.

Research and discussion are ACWRTQ priorities. Items are perused before publication in a bi-monthly journal The Bugle that replaced the American Civil War Round Table of Qld Newsletter in June 2006. Some members conduct research into Civil War veterans buried in Queensland and northern NSW. This was led by the meticulous of non-ACWRTQ member, historian Terry Foenader. There are 26 confirmed veterans graves of interest to the ACWRTQ. The club has put a headstone or plaques on the unmarked graves for Edward Wright (Union Army) at Dunwich Cemetery, Stradbroke Island, William Waters (USN), Richard Curtis (CSN) and Francis Albion (Union army) all at Toowong Cemetery. Formal grave rededication ceremonies were held for Waters (24 July 2007), Curtis (7 November 2010) and William Seymour (30 May 2010, Old Tweed Heads Cemetery, NSW), Curtis (7 November 2010) & Albion (9 August 2014). The ceremony for Waters was ably led by historian Stephen Gapps, whose 62nd New York group attended fron NSW. Queensland descendants of Waters and Curtis were found and attended each ceremony. A third Union veteran grave was found at Toowong and two other Union veterans unmarked graves are confirmed. In 2015 for the final year of the Civil War Sesquicentenary, the ACWRTQ researched a Civil War heritage tour of Queensland. The ACWRTQ published the AMERICAN CIVIL WAR HERITAGE TRAIL, QUEENSLAND in 2016. This is an Australian first! To  defray costs, the heritage trails are sold at $1 each.

Your’s and other’s interest in the American Civil War lies at the core of ACWRTQ so CONTACT us and join in the activites. .